Parys has become a significant golf destination in the new millennium with the construction of two scenic Top 100 courses in the town, built on the Free State banks of the Vaal River. Parys itself is a popular getaway escape for weekenders.

Parys Golf & Country Estate is the closest to town, and on the tree-lined fairways of this attractive modern design you are never far from tributaries of the Vaal. That’s because most of the estate is on an island, reached from the town by an old suspension bridge built in 1918. Golfers probably see more of the river than visitors who frequent the main street of Parys.

The river is more a scenic distraction than a major hazard. It doesn’t come into play too often. However, there is the intimidating long par-4 sixth where the green sits on a rocky outcrop with the river flowing around it. And at the par-5 ninth the approach shot to the green has to carry a significantly wide expanse of water. The elevated green of the par-5 18th has the river coursing around its right side, and then behind the green.

Former golfing legend Cobie Le Grange designed the layout with the late Douw van der Merwe, and it’s a rare out-and-back design which only returns to the clubhouse at the 18th. The halfway house, and four holes (10 to 13) are on the mainland part of the estate. Interestingly, all the greens are raised, a precaution against flooding from the river.

Golf carts (R300 for 18 holes) are compulsory most of the time, but walking is allowed before 10am Tuesday to Thursday, and after 3pm on Fridays and Sundays. The other golf estate in Parys is Vaal de Grace, with a course designed by Nick Price.

Parys upgraded their maintenance fleet with two John Deere machines and a progressive mower from TurfBay. New sand has been put in the bunkers, and the pro shop has been moved and rebranded. 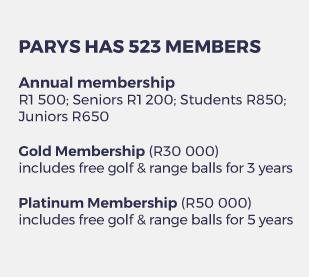 Parys has a demanding front nine, measured at 3 499 metres off the gold tees. Nos 6 and 7 are challenging par 4s which played over par when the Sunshine Tour visited in 2018. The sixth was rated one of the toughest holes that year on tour. The back nine offers more birdie opportunities, with a beautiful run of holes from 12 to 18, several close to the Vaal River.

Public range with separate entrance near 10th tee, a long way from clubhouse. Short-game area at the clubhouse.

1/ Parys has long been a popular weekend getaway for Gauteng residents, 100 kilometres south of Johannesburg. More than a century ago it was known as the Pride of the Vaal to city folk who flocked there by train. Visitors are attracted by restaurants, pubs, microbreweries, cafes, curio and antique shops.

2/ The name of the town was derived from a 19th century German surveyor who said the town’s position next to the broad Vaal River reminded him of Paris on the Seine.

3/ Parys is popular for leisure activities on the Vaal, and Real Adventures provides river cruises, rafting, paddling and tubing, along with land-based action.

4/ Parys Golf Club was founded in 1913, with a 9-hole course on Golf Island as it was called. The new course has hosted two Vodacom Origins events on the Sunshine Tour, in 2013 and 2018.

Course Reviews
Parys is aesthetically pleasing to the eye, especially the holes close to the Vaal River.
David Stratton
The Vaal River swirls around both sides of this golf course, and enhances the attractiveness of the holes. Very popular on weekends, but Parys could do with more visitors in midweek. It's a layout which better golfers will really appreciate; your iron play needs to be strong, as the greens are slightly elevated and the bunkering is good. Parys has had a rainy summer so the course is beautifully green. The practice range is a separate facility some distance from the clubhouse.
Stuart McLean

HAVE YOU PLAYED Parys RECENTLY?